Last spring, Joe Harmeyer, a College of Agriculture Senator for Purdue’s Student Government (PSG) held a meeting in which he invited other student leaders throughout the college. The goal of the meeting was to decide how to better promote and educate others on Purdue’s campus about agriculture.

When school started in the fall, the group, at this point an agriculture task force, met every week to discuss how to brand their message, events that could get students motivated to attend and to decide how exactly they were going to promote agriculture on campus. 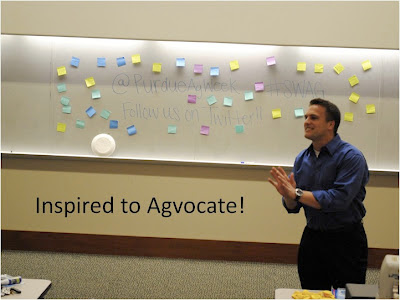 As the fall semester started to come to an end, the task force decided to focus all of their time and attention on planning an “Ag Week,” a week dedicated to promoting agriculture across campus. They scheduled the Ag Week for April, so that they would have as much time as they could to plan this week from the bottom up.

To get the entire College of Agriculture involved in making this Ag Week happen, the task force promoted and encouraged the week to the student organizations within the college. They coached and helped their peers so that the student groups would plan individual events on their own, with help from the task force. 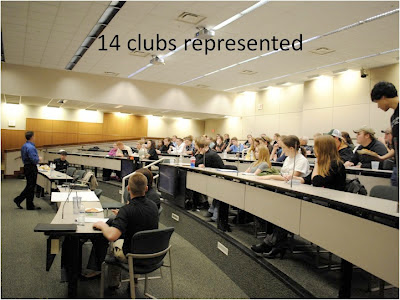 To get these students organizations motivated, the task force held two workshops for the student organizations, not only to get them excited about Ag Week, but also to help them discuss controversial agriculture topics in case they were confronted with them during Ag Week. 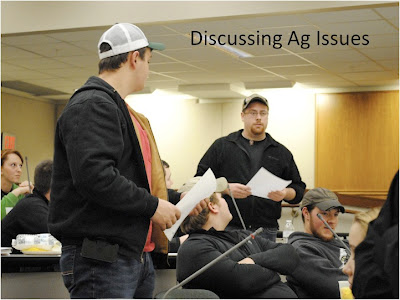 The first annual Purdue Ag Week is planned for April 2-6 on Purdue’s campus. The task force and others involved hope to promote agriculture in a positive light and educate their fellow students and future leaders to See What Ag Gives or SWAG.

INDIANAPOLIS, Ind. (March 23, 2012)—Indiana’s Family of Farmers (IFOF) will continue to offer grants for local communities, and new this year – a category for youth organizations that want to do more to promote agriculture in Indiana.

This is the second year grants of up to $2,000 will be made available to improve educational agriculture-related events around Indiana. The funds, made possible through the IFOF Ag Resource Committee, may be used by local event organizers to fund educational or outreach events focused on food and fiber. This can include Ag Days, Community Agriculture Days, County Fairs and school events to name a few. Grant applicants may also request monies to make capital improvements (like buying demonstration equipment) or safety upgrades (such as purchasing hand-washing stations).

Something new to the grant program this year:  A portion of the funds have been set aside specifically to fund projects executed by youth organizations such as FFA chapters, 4-H clubs, collegiate groups, youth commodity organizations, etc. This category emphasizes youth leadership in the program (not necessarily a program targeted at youth or children).

“Local educational events are a great way to help Hoosiers learn more about all the aspects of agriculture in Indiana,” said Denise Derrer, Public Information Director for the Indiana State Board of Animal Health and IFOF Ag Resource Committee Chairman. “Indiana’s Family of Farmers is excited to continue this grant program to help make both new and existing programs even better.”

The deadline to apply for the grant is May 15, 2012. Applications and detailed guidance may be found online at:www.indianafamilyoffarmers.com/partnership.html.
Posted by Unknown at 2:32 PM No comments:

There are simple, homey stews just for family and fancy stews fit for company. This one's a cut above with cayenne, oregano, fennel seeds, red wine and pimento-stuffed olives for a Mediterranean sophistication.

Start the day right with an easy and delicious beef dish. Combine sweet potatoes, onion and taco seasoning in large nonstick skillet over medium heat and add last night's cooked steak or roast (trimmed into small pieces). Whip up a zesty side of sour cream and hot sauce and serve the savory potato hash with a cilantro garnish.

Instructions
1.      Combine sweet potatoes, onion and taco seasoning in large nonstick skillet over medium heat. Add water. Cover and cook 8 to 10 minutes or until crisp-tender and water has almost evaporated, stirring once. Stir in oil; continue cooking, uncovered, 4 to 6 minutes or until potatoes are tender and begin to brown, stirring occasionally.
2.      Meanwhile, combine sour cream and hot sauce in small bowl. Set aside.
3.      Add beef to potato mixture. Continue to cook 5 minutes or until beef is heated through, stirring occasionally, adding 1 to 2 tablespoons water, if needed to avoid sticking.
4.      Garnish with cilantro, as desired. Serve with sour cream mixture
Posted by Unknown at 1:52 PM No comments:

INDIANAPOLIS (March 9, 2012) -  Indiana’s Family of Farmers (IFOF) and six of Indy’s tastiest Food Trucks did not let rain dampen their serving up a celebration at From Tractor To Truck yesterday at the Indiana Government Center for National Ag Day and Nutrition Month! We would thank our participating Food Trucks and their Celebrity Food Truck Partners: In addition, thanks to MacAllister Equipment Sales and Keevin Lemenager, who generously loaned his a Caterpillar Challenger, 675D tractor for the event.
And we would also like to recognize and thank the Indiana State Motor Pool for their help with the safe housing of the tractor, Officer Brad Mundy and the Indiana State Police for escorting it safely from Motor Pool to South Senate and Tracy Jones and her crew with the State House Events and Tours for all their help and creativity.

Thanks also to Piazza Produce and Prairie Farms for their donation of milk, apples and carrots in front of each Food Truck to help Get Your Plate in Shape!
Congratulations to our Ag Essay Winners! Click here for a look at photos from the day.

Posted by Unknown at 2:55 PM No comments:

Ag Day holds a special place in the hearts of the Campbell family from Franklin, Indiana.  Jennifer (Jent) and her husband Chris, along with their kids: Casey, 16; Emi Lou, 12; and Cole, 9, farm approximately 2000 acres of corn and soybeans as well as 40 acres of wheat. They also own and operate a farrow to finish hog operation with 110 sows.  They have a small cow/calf operation.  Chris is the sixth generation to live and work on the farm. 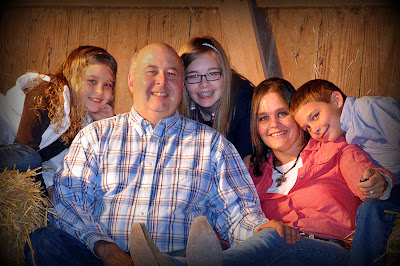 Jent and Chris strive to instill hard working values and a respect for the land and agriculture in their kids.  They allow the kids to work beside them every day with hopes that someday it will pay off but Jent says, “What they do with that knowledge is up to them.”

This is the first year that all three of the Campbell kids will be in 4-H.  They are all involved in the Johnson County Jr. Beef Association.  Casey is very active in FFA and serves on the Johnson County Soil and Water Youth Board.  Casey and Emi Lou have played fast pitch softball.  Cole loves to farm.  Jent recalls a time when the girls tried to convince him to play baseball.  He said, “Sure.  I’ll try it.”  Then Jent told him that he had to go to every practice and every game regardless of what his dad was doing.  His response: “No way!  Forget it!”

The Campbells are very active in the Ag Day celebration in their community.  For the past four years Jent and Cole have helped highlight agriculture at Needham Elementary.  The celebration at the state house has proven to be an exciting time as Casey won the essay contest for her age group last year and Emi Lou was one of the proud recipients this year.

When Jent was asked about her feelings toward Ag Day she said, “I personally think every day should be Ag Day.  We all eat every day!  I love every opportunity I get to tell and/or celebrate what we do every day and I feel privileged to be able to participate.”

If you would like to learn more about the Campbell family and their farm visit Jent’s blog at From My Front Porch.

***
Join the Campbells tomorrow at our Ag Day Celebration: From Tractor to Truck (#Tractor2Truck) at the Government Center in downtown Indy.
Posted by Unknown at 11:52 AM No comments:

INDIANAPOLIS (March 2, 2012) -  Join Indiana’s Family of Farmers (IFOF) and six of Indy’s tastiest Food Trucks for From Tractor To Truck (#tractor2truck), a celebration of National Ag Day and Nutrition Month. Come hungry Thursday, March 8 when the food trucks will be open for business from 11 a.m. – 2 p.m. at the Indiana Government Center - South Senate Avenue!

The following food trucks will be available: Scratch Truck (@scratchtruck), Scout’s Treats (@scoutstreats), Tacos without Borders (@tacoswoborders), New York Slice (@TheNYslice) West Coast Tacos (@westcoasttacos), and Some of this! Some of that! (@SOTSOT1) for their participation and look forward to the opportunity to support their local businesses March 8.
“This event has further enabled us to reach our community and share with them that quality agriculture provides not only quality food but a wide variety of food choices,” said Joe Kelsay, director of the Indiana State Department of Agriculture. “I am proud to say that the food we all can enjoy every day on every one of these food trucks or at the grocery store or farmers market or half way around the world is in part because of Indiana’s 61,000 family farms.”
From 12 – 12:30 p.m. local celebrity “Food Truck Partners” will join the festivities and encourage the crowd to chew on some interesting ag facts at their assigned truck. Come on out and join:

Chikage Windler from the Skytrak Weather Team of WTHR (@ChikageWTHR), won’t need to forecast the beef facts you’ll want to know at Scratch Truck.
Tracy Forner from of WISH-TV’s Indy Style (@IndyStyle) will have some “udderly” interesting info on dairy at Scout’s Treats.
Danielle The Face of MyINDY-TV 23 (@FaceofMyINDY) shares her joy for soy at “Some of this! Some of that!
Dave O’Brien Morning Host of Hank FM (@HankFM) will have plenty of poultry pearls of wisdom at Tacos without Borders.

Crave more ag info? An FFA Officer will be on hand to fill your order!

Get Your Plate in Shape at each Food Truck for National Nutrition Month with some udderly delicious FREE dairy products courtesy of Prairie Farms as well as carrots and apples from Piazza Produce. Americans are consumed with what we need to limit or eliminate from our plate to make it healthy, but to “Get Our Plate in Shape,” consumers typically just need to add foods that are nutritionally sound, like fruits and vegetables or low-fat dairy, to get that nutrition boost.  Nutritional “AG”visors will be available at each truck if you have any further nutrition questions.

And the IPad goes to….

Prior to lunch, from 11:30 a.m. to 11:45 a.m., a brief presentation to celebrate Indiana’s agriculture industry will take place. IFOF (@FamilyofFarmers), along with Indiana Humanities (@INHumanities) will also recognize six Hoosier students for their winning essays in the 2nd Annual Ag Essay Contest titled “Our Food, Our Farmers.” This year’s contest explored Indiana’s role as a global agricultural leader.

More than 280 students submitted essays from across Indiana. The winning essays were selected from three grade levels: 4-6; 7-9 and 10-12. First place winners will receive an Apple iPad and second place winners receive a Kodak Playsport camcorder.

The winning essays are posted on Indiana’s Family of Farmers and Indiana Humanities websites. 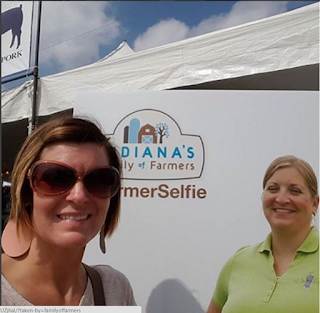